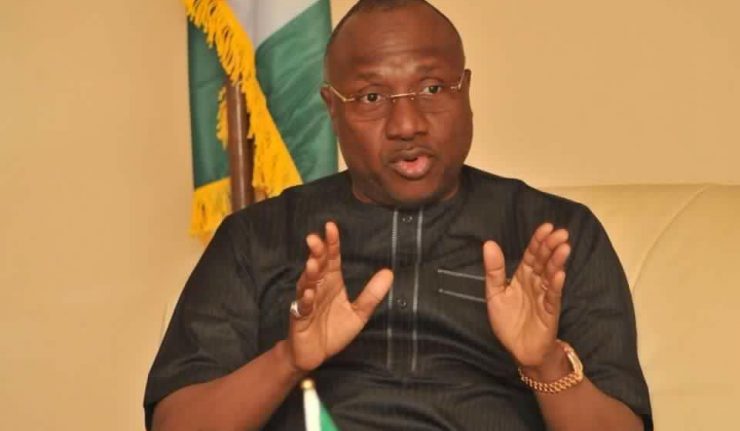 Sometimes in 2016, the Secretary to the Adamawa State Government, Umar Buba Bindir, in a radio programme blamed the Fulbe for all the ills bedeviling the state.  Those who had the time and the inclination howled and ranted to hearts’ desires.  Neither the SSG nor his principal recanted or denied ever saying so.  After a few months, as is always with us, the matter died just like that.   Not to be outdone, the late Chief of Staff to the governor, Abdurrahman Abba took the narrative further by emphatically telling his audience at the palace of the Hama Bachama that Bindowo’s government is that of the kabilu (loosely translated to mean all other tribes minus the Fulbe).  His esteemed audience included the Hama Bachama, governor Bindowo and other top government officials.  And out from the blues, came the most recent one in the heat of the APC primaries when the governor was fighting for his political life.  A close ally of the governor was seen and heard in a video clip telling the governor’s supporters in Mubi that the Fulbe hates Bindowo.

I am not taking the reader down memory lane in order to open healed wounds but if the reader follows me patiently you will get the gist of my piece.  The issue of ethnicity and tribal loyalties has been a recurrent decimal in Adamawa politics since the days of Gongola state and I believe our underdevelopment may not be unconnected to this monster in the hands of our elites.  In the run up to the residual tenure election of 2014 in the state, some mischief makers alleged that the then acting governor, Ahmadu Umaru Fintiri claimed to have “broken the Fulani calabash”.  The rumour quickly took a life of its own because it was meant to achieve a certain end.  When I had the opportunity at that time, I asked Fintiri whether he said what he was alleged to have said and he swore to me he didn’t.

Bindir’s faux pax was made on Radio Dandal Kura and therefore was recorded for posterity.  The audio clip of the programme went viral at a point in time and will not be easily denied or debunked.  The late Abdurrahman Abba’s pronouncement was (is) also in the public domain so also the fact of its non-contradiction by the governor.  In the heat of the APC primaries where Bindowo faced-off with two Fulani candidates one of his lieutenants was seen and heard telling his supporters in Mubi that the Fulbe hate Bindowo.  It wasn’t denied by anyone yet.  The video clip is also available But I have scoured most sources both human and the Internet, for a clip, either video or audio containing the allegation made against Fintiri but couldn’t lay my hands on any.  I am still looking for such documentary evidence – I am ready to pay for it.

I went to this length to show whose political substructure is built on an ethnic base between the duo – Fintiri and Bindowo.  When the people of Adamawa state queued up in 2015 to vote for Bindowo, I don’t believe his ethnicity was one of the factors that helped him defeat his opponents.  The Fulbe in their hundreds of thousands denied two of their kinsmen – Nuhu Ribadu and Dr. Modibbo – the opportunity of becoming governors and overwhelmingly voted for Bindowo.  What prompted the “gwamnatin kabilu” declaration then?  What was it meant to achieve?  What was (is) the motive behind this manifest brazen exclusion of a particular tribe in a government, which is a product of a coalition of all the tribes in the state? What was the expected outcome of such an insensitive declaration?

How can a government that is meant to treat all its citizens equally and equitably deliberately crack wide-open hidden fault lines?  Anyway, for the discerning, the tremor of the ‘Numan declaration’ is still reverberating in the needless killings taking place around the outback of Numan.  Those who alleged that Fintiri is an enemy of the Fulbe are still alive and they know why they alleged what they alleged.  They have since admitted the falsity of their allegation and apologized to Fintiri.  I am only surprised none of them said anything about Bindowo’s latent xenophobia against the Fulbe.

President Muhammadu Buhari have bequeathed on the country a new way of doing campaign – cashless.  I wish him another term in office for this policy to be entrenched in our politics.  The new campaign currency is integrity – you either have it or you don’t.  Another promissory note is honesty but not the digital variant.  It takes your sensitive honesty to evaluate a man’s integrity.  A leader is supposed to bring all his people under one roof not knock down the rafters of one group while keeping some under his roof.

When Bindir, an engineer, made his ‘earth shattering’ discovery, many people became nervous thinking that an explosion of anger will occur, some shocking sign of hostility, which never came.  The governor’s silence only signifies acquiescence, an affirmation of his beliefs and a thrust of his government policies.  This only emboldened other government officials and friends of the governor to come out from the closet with xenophobic allusions.

My take on Bindowo and his politics of identity politics is that he is tortured by his inadequacies and therefore transfer his complex make-up into ethnic aggression.  Majority of the people of Adamawa are those who only wanted to live in sanity, comfort and brotherhood and therefore cared less about one another’s tribe, tongue or creed.  They congregate in the ghettos of Yola, Mubi or Numan; they meet in dilapidated government schools or hospitals to discuss their common poverty and sense of denial of opportunities by a government that celebrates salary payment.  They do not have the luxury or inclination to discuss about their differences, which they may not be aware of in their poverty-induced stupor.  They are the type who lead useful, active private lives in public silence.

Some of the most important prerequisite for leadership are competence, integrity and honesty.  There are no alternatives to these if we are serious about enthronement of good and accountable governance.  Banging the heads of your people against each other is no substitute to the aforementioned.  There are also no mitigating considerations once the actions or inactions of the leaders lead to fission among the led.  If a leader leads well, he need not behave like a merchant of hate in order to win the benevolence and support of the led.  It should be granted not as a gift but as a debt.  It shouldn’t be an affection but recognition.  It breeds a connection between the leader and the led.

Fintirie achieved the above without being an ethnic chauvinist.  There may be a lesson for us (the digital generation) to learn from his kind of politics.  May God save us from the merchants of bigotry.