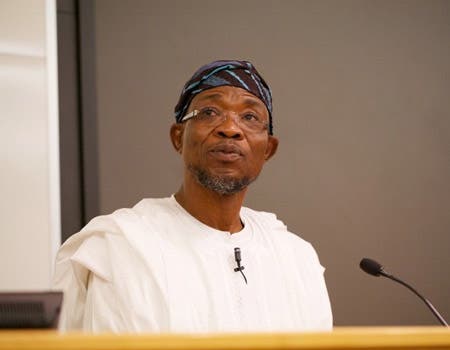 Minister of Interior Rauf Aregbesola has forewarned travel services never to take part in dealing and sneaking into the country or outside the country.

He settled on the decision during a joint partner exchange on Trafficking in Persons (TIP) and Smuggling of Migrants (SOM) on Wednesday in Abuja.

Aregbesola, who was addressed by the Comptroller General of the Nigeria Immigration Service (NIS), Mr. Muhammad Babandede, said any travel service discovered needing such wrongdoing would be boycotted to fill in as a hindrance to other people.

On his part, Babandede called for a more powerful coordinated effort among NIS and the National Agency for the Prohibition of Trafficking in Persons (NAPTIP) to push the battle against dealing.

As indicated by him, dealing is an issue that is exceptionally dear to him since it is coordinated wrongdoing, and that cooperation is expected to handle the threat.

He said, "NAPTIP and NIS should awaken to the duty of handling the danger; we need to return to the primary level rating of fighting this wrongdoing, we should think of responsibility toward taking out this transborder wrongdoing.

"We should keep on being essential for this battle and secure our ladies and youngsters; each official in NAPTIP and migration should be focused on this course.

"The battle against dealing will be won on the off chance that we as a whole show responsibility."

Likewise, the Director-General of NAPTIP, Mrs. Imaan Suleiman-Ibrahim, who recognized the organization of all to see to the furthest limit of dealing, emphasized the responsibility of the office and different partners to end the scourge.

She said that the office would utilize the cultural methodology in taking up arms against dealing and expanding on insight sharing.

She said, "having migration supporting us gives us a ton of lifts, and we will keep on depending on that help; on our part as an office, we have the political will to take the battle to a more significant level.

"Battling dealing requires grassroots methodology; we have made a great deal of speculation, we will before long harvest the proof," she said.

Mr. Oliver Stopes, the UN Office on Drug and Crime (UNODC) Country Representative, who noticed that youngsters overwhelmingly completed dealing, said there was a need to connect with the grassroots to know about the strategies utilized by dealers in getting their casualties.

As Stopes indicates, there is a need to improve the limit of associations that are battling dealing and fortify their push to know the different types of dealing.

Subsequently, Stopes invited a coordinated framework among NAPTIP and movement to defy the threat together.